There is probably only a small group of people in the world who have never heard of badminton. From Brazilian beaches all the way to the streets of Shanghai, players of all generations are trying to keep the birdie in the air with the help of their rackets.

Badminton is the fastest racket sport and even one of the fastest sports out there. Professional players must be in excellent shape with sharp reflexes because the birdie can unbelievably reach up to 300 km/h.

The world record for the fastest shot is almost 500 km/h (precisely 493 km/h) and is held by Tan Boon Heong from Malaysia.

Even though the playing area is only approximately 70 m2, players run several kilometers during a match and the physical toll is enormous. Badminton is, however, a very technical sport and less physically fit players can thanks to excellent technique and tactics beat younger and agiler adversaries during amateur events. And that’s the beauty of sport.

Games which were similar to today’s badminton date back to the 7th century, when Chinese played the game called “Di-Dšijan-Dsi” which was significantly different from today’s badminton.
We can find references about a game called “Poona” in Japan and India in later periods. The game spread from India in the 1860’s to the United Kingdom, where it was brought by officers of the British army serving in colonized India. It quickly became popular mainly in wealthy and rich families.

Badminton gained a bigger fan base in 1873 when a sports enthusiast Duke of Beaufort organized a garden celebration at his summer mansion called Badminton, where he introduced the new game to his friends. However, the Duke changed “Poona” significantly – he marked out the field, whose dimensions were derived from contemporary dance hall attributes, divided it by a tennis net and determined basic rules. 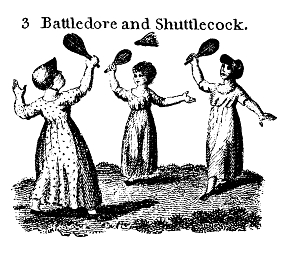 This way he gave sport characteristics to a spontaneous knocking up of the birdie and we can say that he guided it into a fully-fledged sport.

For many years this sport was called “The Game of Badminton”, which was too long. The sport’s popularity rose, and in just a few years it was known as “Badminton” all around the world.

It didn’t take long and in 1893 the first badminton association was established in England. In the same year, the association issued the first set of rules of badminton which were used as a base during the first championship which took place in 1899.

The establishment of The Badminton World Federation (BWF) in 1934 was a big milestone. From this year on the game became an international sport with professional players from America, Europe and of course Asia, where badminton is very popular.

In 1992 badminton received a big honor, when it was officially introduced into the list of Olympic sports. Summer Olympics feature male and female singles or doubles, and from 1996 also mixed doubles.

To describe the basic rules and principles of the game we have to define the number of players. Badminton, similarly to tennis, can be played as singles or doubles.

The court for singles is 17 ft wide and 44 ft long. The length stays the same in doubles, but the width changes. From each side, 1.5 ft is added and the overall width of the court for doubles is thus 20 ft.

The court has, therefore, a rectangle shape and is separated by a net in the exact center. This net is attached to posts which can’t reach into the court. The net is elevated to 5 ft and 1 inch. In the middle, the height of the net is exactly 5 ft.

There are several determining lines which divide the court into several parts. These lines are very important, for example when serving.

Players serve diagonally, similarly to tennis. The birdie has to fall beyond the service line of the opponent and can’t touch the net while serving.

In contrast to a tennis serve, a badminton racket must hit the birdie in a maximum height of the serving player’s waist. The player who wins the exchange serves next, i.e. the serve doesn’t rotate in regular intervals.

Since 2006, a new system of score counting is used in professional badminton. The match ends in 2 winning sets, each consisting of 21 points, and the side which wins the exchange wins a point.

In professional matches, players can use a 1-minute pause after reaching the 11th point. There is a 2-minute pause between sets.

Feather birdies are, however, due to their processing and used material more expensive, and therefore are recommended for intermediate and professional players.

I'm a former professional badminton player from Belgium. I have won multiple local tournaments and have gained many experiences during my career. Badminton has remained my passion, and therefore I have decided to create this website, where I can post various tips from the badminton world. Read more...