Even though the official rules of the BWF are an enormously long document in which all the details and rules of professional badminton are defined, beginners and slightly intermediate players will be okay with this selection of the most important parts on how to play badminton.

You can find the complete statues and rules on this website: http://bwfcorporate.com/statutes/

How To Play Badminton

This list of basic rules and procedures on how to play badminton is applied when playing in a gym. You can of course always reactively toss the birdie above the net using your badminton set in the garden, but rules are pointless in such a scenario.

However, if you enjoy badminton and are eager to improve, you should for sure visit the nearest gym and play on a real court.

But before that, a simple explanation of basic principles and rules together with recommendations linked to basic equipment will surely help you. Let’s go.

Birdies with which badminton is played are very light. And that is exactly why badminton is always played in gyms and you won’t find any outdoor courts. A slight breeze could take the birdie on a ride.

You can find the badminton court dimensions and the respective distances on the image below.

As far as the score goes, a point is valid also when the birdie hits the line. The badminton net is at a height of 5 ft and divides the court in half.

Every half of the court is then divided by a center line and other lines which define the space for singles and doubles.

In case of a multifunction gym you can find other lines on the court as well, however, they are always differentiated by different colors which correspond to different sports. All lines related to badminton are of the same color (most commonly white).

The game itself is simple. The goal is to get the birdie above the net onto your opponent’s half, in a way that they won’t be able to return it. The point is assigned when:

The player makes an error when he can’t hit the birdie into the defined area on the opponent’s half or when they are not able to get the birdie above the net. In such case, the point is assigned to the opponent.

In professional badminton, where the speed of flying birdies is enormous, and millimeters decide the points, the main referee gets help from line referees, similarly to tennis.

At the most prestigious events, where modern technology is involved as well, players can object to the referee’s verdict and ask for a “Challenge”, during which a special device decides the precise impact. The player can use the “Challenge” only 2x per match. This is mainly to hinder the misuse of this option, and prolongation of exchanges.

Until 2006, a badminton match ended when a player or team won 2 sets of 15 points. The sets of women singles consisted of 11 points.

In 2006, BWF adopted a new system of counting, which is used until now. All badminton disciplines (men, women, mixed doubles) are played until someone wins 2 sets of 21 points and the side which wins the exchanges always gains a point. They serve until they lose a point.

The player who wins an entire set has the advantage of serving first in the following set.

A special situation occurs when the score is 20:20.

Serve is a very important aspect of badminton and with the right execution, the player can gain a big advantage right at the beginning of the exchange. The birdie must fulfill 3 basic rules while being served:

The serve in singles and doubles have different rules. In singles, the area into which the serve should head is longer and narrower. The exact areas are displayed on the following image.

The serve is carried out diagonally, in case of an even score, the serving player serves from the right. If the score is odd, the serve comes from the left.

In case of doubles, the serve is a little bit different and more complicated for beginners. If the serving side wins the exchange, they serve again, but from the other side, in a way that the birdie heads towards the second opponent. The positions of players don’t change in doubles and remain the same throughout the entire set. Thanks to this, when the serve is lost and subsequently a point is won again, the player that hasn’t served before, will. 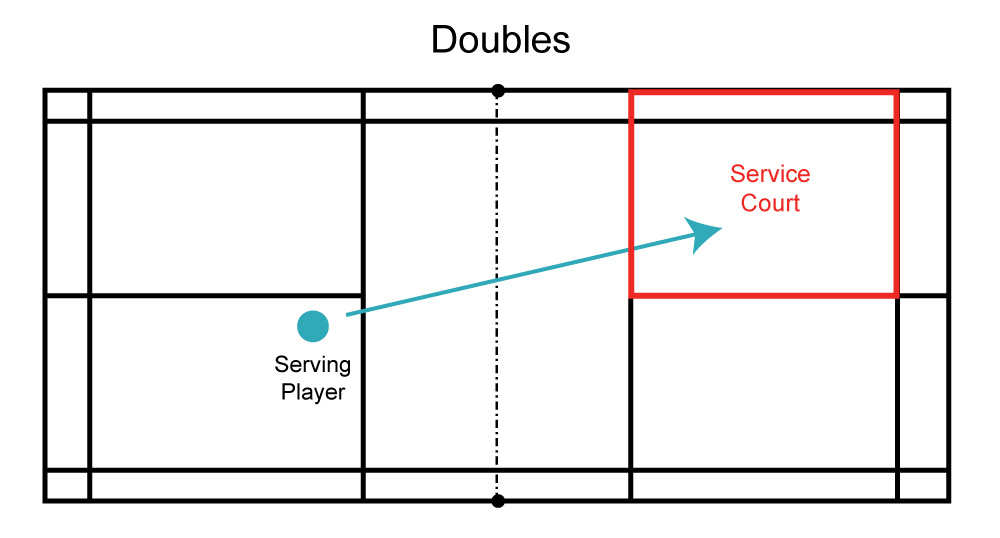 As by every sport, some basic equipment is needed for badminton as well. Mainly these 3 components are important. A racket, birdie and appropriate footwear. In addition, there are many professional clothes on the market that will help for example with sweat release. In case of amateur or slightly intermediate badminton players, however, this surely isn’t a condition.

Badminton rackets are similar in shape to other racket-based sports, such as tennis or squash. The biggest difference is their weight. Professional rackets are approximately 2.5 – 3.5 ounces if we deduct supplementary grip and strings.

In the beginning, badminton rackets were made of wood, later, aluminum was mainly used. Aluminum rackets are available today as well, but they are very rare.

Most of the badminton rackets nowadays are made of carbon micro-fibers similar to nano-materials which give the racket excellent qualities such as flexibility and durability.

According to the shape we distinguish:

Even though classic oval rackets are still available, they are for sure less popular, and the majority of amateur and professional players use newer isometric rackets.

According to weight and stiffness we distinguish:

Birdies for amateurs and slightly intermediate players and those used in professional badminton are very different from each other, they are only similar in shape. It’s once again a particularity of this sport, which is very rare in others. Are you asking why?

The answer is simple. Price.

Professional players use birdies which are made of real geese feathers in matches (16 pieces from left wing). These birdies have fantastic fly attributes, but since they’re made of a very specific organic material, their durability isn’t ideal.

Professional players can use up to 27 of these birdies. If you take into consideration that these birdies are expensive as well, amateurs and slightly intermediate players use alternative, synthetic birdies.

They are made of nylon and the durability is relatively high. Fly attributes are a bit different, but the weight and shape are very similar to the feather ones.

If you are starting with badminton, synthetic birdies are the right choice for you.

Badminton, such as all other racket sports, is a high endurance sport. It’s very demanding in terms of the entire moving apparatus, but footwear as well. That’s why beginners should pay special attention to the quality of footwear.

In comparison to running shoes, these gym badminton shoes have enforced sides which help to keep the food in the right position, so injuries are avoided.

Due to the dynamic nature of the movement, badminton footwear should be at least 1 size bigger and the end of toes shouldn’t touch the shoes at no cost. The footwear should be properly tightened during playing, not loosened, but at the same time, it shouldn’t be in your way.

As in the case of other gym sports, it’s important that the footwear has a non-marking sole for gym sports. It’s made from a special material which doesn’t leave black or colored marks on the floor and fits excellently.

Remember, we mustn’t slide in a quality badminton footwear!

I'm a former professional badminton player from Belgium. I have won multiple local tournaments and have gained many experiences during my career. Badminton has remained my passion, and therefore I have decided to create this website, where I can post various tips from the badminton world. Read more...